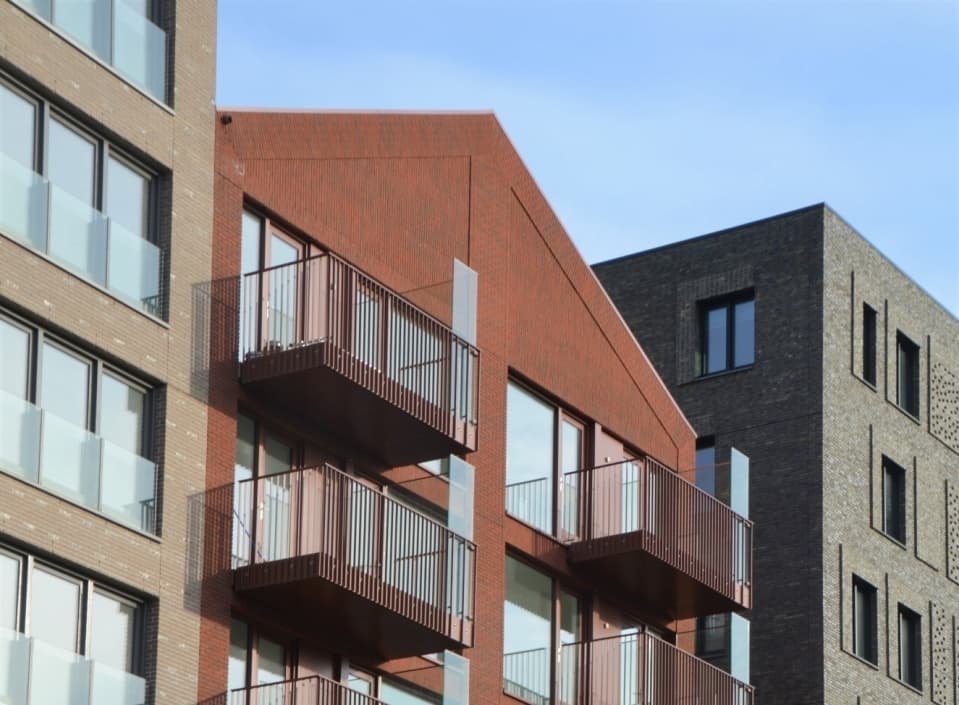 Red Ruby is an apartment complex on Oostenburg Island in the heart of Amsterdam. The aluminium provides slenderness in the warm red residential building. Aluminium detailing can be found at the entrance as rainwater downpipe cladding and underneath the balconies. 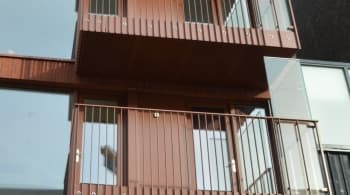 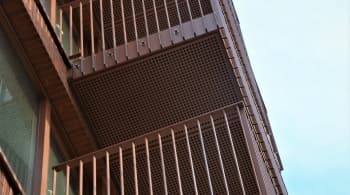 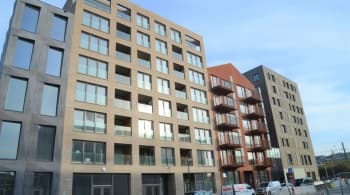 ALUMINIUM IS A GOOD ADDITION

Red Ruby looks like a charming, strong woman amidst a number of broad-shouldered gents. It is smaller and slimmer than the adjacent residential buildings, but with a striking presence thanks to an effective layout. It’s also down to its colour and archetypal form. Red Ruby was designed by architects Daniel Aw and Rikjan Scholten of Bureau Fraai in Amsterdam. The apartment complex was built on Oostenburg Island in the heart of Amsterdam.

Red Ruby is not only distinguished by its striking warm red brick. Its saddle roof also differs from the flat roofs of the other buildings. And with good reason. Architect Daniel Aw: “Oostenburg Island is an historic area, laid out along the IJ in the 17th century. It is a place where trade was conducted for the next 300 years and where the industrial revolution was rolled out. The ships of the Dutch East India Company used to moor here. If you look at the layout of the façades, you can see the shape of a mast, including a sail.” Later, Oostenburg Island became a true industrial area where the shrill whistle of newly produced locomotives could be heard far across the water. “The industrial history is reflected in the design. For the saddle roof and the red brick, we were inspired by the iconic Van Gendthallen, a striking industrial design located nearby. These buildings have a red-brown brick façade and saddle roofs. The robust brickwork of Red Ruby is derived from them,” says Aw.

Red Ruby was commissioned by Stadgenoot Ontwikkeling. The six-storey building consists of 21 apartments in the mid-rental sector. The entire complex is built in the same red colour. The façade is characterised by wide openings, allowing the residents to optimally benefit from the incoming daylight. The four upper apartments have extra space thanks to the saddle roof. The back of Red Ruby is adjacent to a kind of court garden. The other buildings also border this garden, including the only office building in the scheme. This office, which is constructed entirely from one type of custom-designed prefab element, was also designed by Bureau Fraai. This building also fits seamlessly into the image quality plan. The overriding principle of this plan was that the area should consist of contrasting, autonomous buildings with a clear identity of their own.

Back to Red Ruby. You shouldn’t keep a lady waiting. For the materials, the architect chose a combination of brick, wood and aluminium. Sustainability certainly plays a role here. Daniel Aw: “Good masonry, like that of the Van Gendthallen, lasts forever. We want the same for Red Ruby. That also applies to aluminium detailing. Aluminium has a long lifespan and requires hardly any maintenance. That is also important for the client.”

As far as aluminium detailing is concerned, there is a lot to be said for the warm red residential building. The undersides of the balconies are fitted with perforated aluminium cladding to improve the acoustics. Daniel Aw on this: “Aluminium is a good addition. You create a kind of slenderness with it. It also serves as a counterpart to more robust materials like brickwork. In this way the materials reinforce each other creating a kind of natural balance.”

The entrance area is also fitted with aluminium cladding. The mailboxes are made of aluminium. There are in the same red colour, of course. Perhaps the most beautiful and functional detailing is the way in which the rainwater downpipe is hidden from view. “It was quite a struggle to get that right,” Aw explains. “On the one hand you want an aesthetic solution, and on the other you want to meet the client’s wish that the rainwater downpipe be accessible for maintenance. As for the latter, a visible downpipe is an obvious choice. Nevertheless, we succeeded in meeting both objectives by concealing the rainwater downpipe in the façade between the windows and covering it with an aluminium plate. This plate can be easily dismantled so does not form an obstacle for possible maintenance. Moreover, this solution suits our ambition to go to the extreme limits of the financial framework for high-quality solutions.” 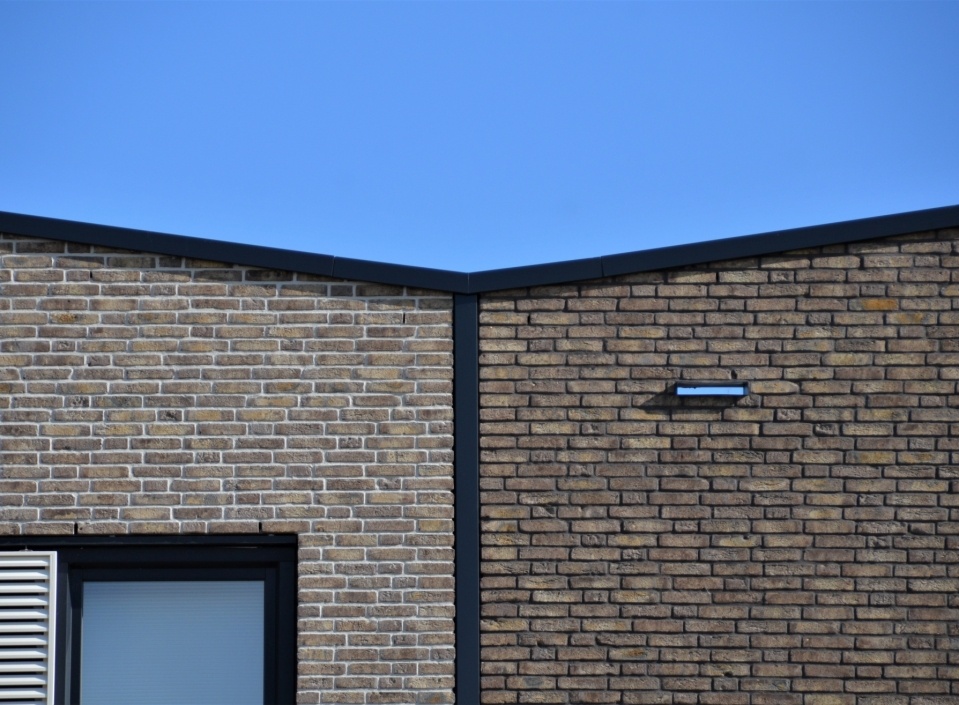 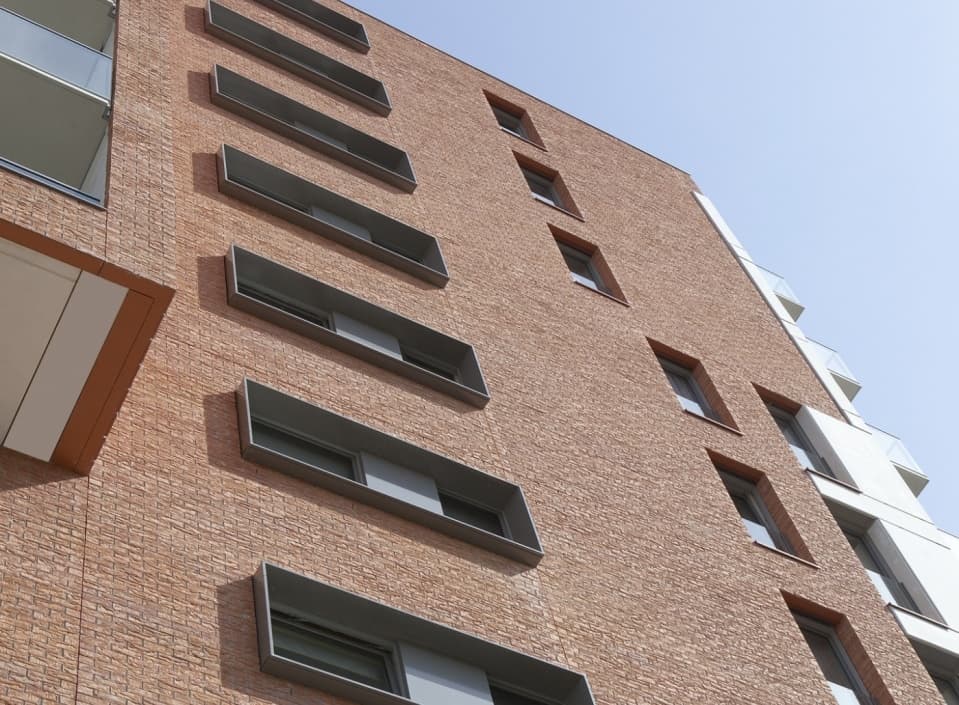